“My first experience of veganism hit me like a lead balloon,” says Laura Chepner, founder of Veducation Consultation and author of Veducated: An Educator’s Guide for Vegan-Inclusive Teaching. “I wish I had always been vegan, but in April 2020, it was my six-year vegan anniversary. The last few years have been marvellous and life-altering.”

As a mother, teacher, writer and founder of Veducation Consultation, it is safe to say that Chepner is a multi-skilled woman: “I am getting quite good at plate spinning,” she laughs as she explains how the company first came about.

After graduating from University — with a degree in Primary Education — Chepner worked as a teacher for a few years until she became vegan: “I began to quickly notice that the curriculum I was teaching was not in line with my ethics. So I left the profession and opened a vegan restaurant.”

The pivotal moment — when Chepner realised something needed to happen — was when her daughter was denied vegan food on her first day at school: “With my knowledge of how schools work, the legal protections that vegans have and the ease at which vegan food can be created, I went in full steam ahead.”

This certainly wasn’t done in vain. Chepner’s borough went on to be the first in the UK to implement a vegan menu in a primary school. Following this achievement, Chepner decided to sell her restaurant and dedicate her time to ‘Primary Veducation’, which evolved into Veducation Consultation in 2019.

“My time was then split between assisting vegan parents online, by providing them with letter templates and an intermediary voice with their schools,” Chepner explains: “I would travel the UK providing free school staff training on vegan-inclusive classrooms.” However, during the research for Chepner’s book, she realised that any person of any age and in any part of society could benefit from her training.

As part of her service, Chepner “provides vegan-inclusive training to staff in any sector from nursery to small business to corporations”, using her experiences as a teacher and as a company director.

The services that Veducation Consultation offers are desperately needed, and the goals are clear. “Vegan children and adults see things very differently to their non-vegan counterparts. In order for them to feel comfortable, valued and understood in a school or work setting, it is imperative that their world view is acknowledged and taken into consideration.”

With research showing that veganism is now the fastest-growing lifestyle movement, the work that Chepner is doing is undeniably vital and important in today’s changing world. “The main aims and objectives will always remain the same,” she explains. “To encourage vegan-inclusion throughout society. I offer an opportunity to become more inclusive and strengthen ties between pupils, parents and leadership teams as well as directors, staff and clients in an informative and positive way.”

Currently, schools are not designed to be very vegan-friendly but Chepner’s motivation and determination to bring about change to the system is apparent:

“It is part of the reason that I wrote the guidebook, so that parents could have something that they could physically give to their teachers.” In addition to her guidebook, she has also created a free resource for teachers in primary schools to accompany my vegan children’s book Vivi the Supervegan, which will encourage teachers to use vegan literature in their classes.

Chepner’s work in school settings is key. Children are the future and for veganism to become ‘normalised’ in the school system, things need to change: “I am collaboratively working towards creating a ‘Veganism in Education’ curriculum. At present, it is just me planning and presenting throughout the UK and, as a consequence, there are only so many schools or businesses that I can visit or parents that I can help. I would love the opportunity to bring in some more consultants in the future to work regionally and that way we can have more impact.”

Read our story on whether plant-based education is key to a more accepting perspective of the lifestyle.

Although veganism is now going more mainstream — with a growing number of people switching to vegan lifestyles and plant-based diets — it is still a controversial topic in schools. Many parents all over the UK are battling simply to get vegan food provided for their children at school, let alone to get their schools to be more ‘vegan-inclusive’.

Chepner shares her view on why parents are met with resistance in the school setting: “As in any walk of life, there is sometimes resistance, but this mainly comes from a place of worry, not necessarily maliciousness. Any good headteacher or manager who ‘practices what they preach’ with regards to inclusion should respond in a positive way.”

Dr Melanie Joy — author, psychologist and vegan advocate — explains how carnism is embedded so deeply into our society. It has “created a defence mechanism that distorts perception and has disconnected us from empathy”.

“I can sometimes sense people’s apprehension when I begin a staff training session,” Chepner says: “I make it very clear from the start that there will be no slaughterhouse footage during presentations and that I do not expect staff members to change any behaviour in their personal lives. By the end of it, they always seem pleased to feel somewhat enlightened and are always willing to make vegan-inclusive tweaks in the weeks that follow.

“The most difficult area is when a headteacher doesn’t understand the rights of a vegan child and the catering company is also being awkward. They spend time blaming each other as opposed to fixing the issue of zero vegan options.”

This is when Chepner gets involved: “It can be quite daunting for a parent to step into the middle of that, not really knowing on whom the responsibility falls. I have had many successful clients who, after a short consultation with their school or work, have seen positive changes and new vegan menus implemented as an example.”

As with all social justice movements, there is resistance along the way. “I get so upset and frustrated that the law isn’t black and white and that some schools think they are in a position to happily declare that they won’t provide vegan food, and think it is okay to do that,” Chepner shares.

She also reveals the most difficult part of her job: “Knowing how many people are still being discriminated against, bullied or excluded for being vegan is very upsetting. It does feel like an uphill battle to have veganism incorporated into school and workplace policies.”

Read the stories of vegan parents and children who have faced discrimination.

Even after all of this, Chepner is not deterred: “I am positive and happy to ‘veducate’ one organisation at a time, whilst pushing projects which support vegan-inclusion forward.”

With veganism now being legally recognised as a protected belief, it should help to have a positive impact on Veducation Consultation: “In all of my communication with organisations and the letter templates that I provide to parents, I mention this and the Human Rights Act 2010. It is not widely known, so it does help to change people’s perspectives on why I am getting involved.” 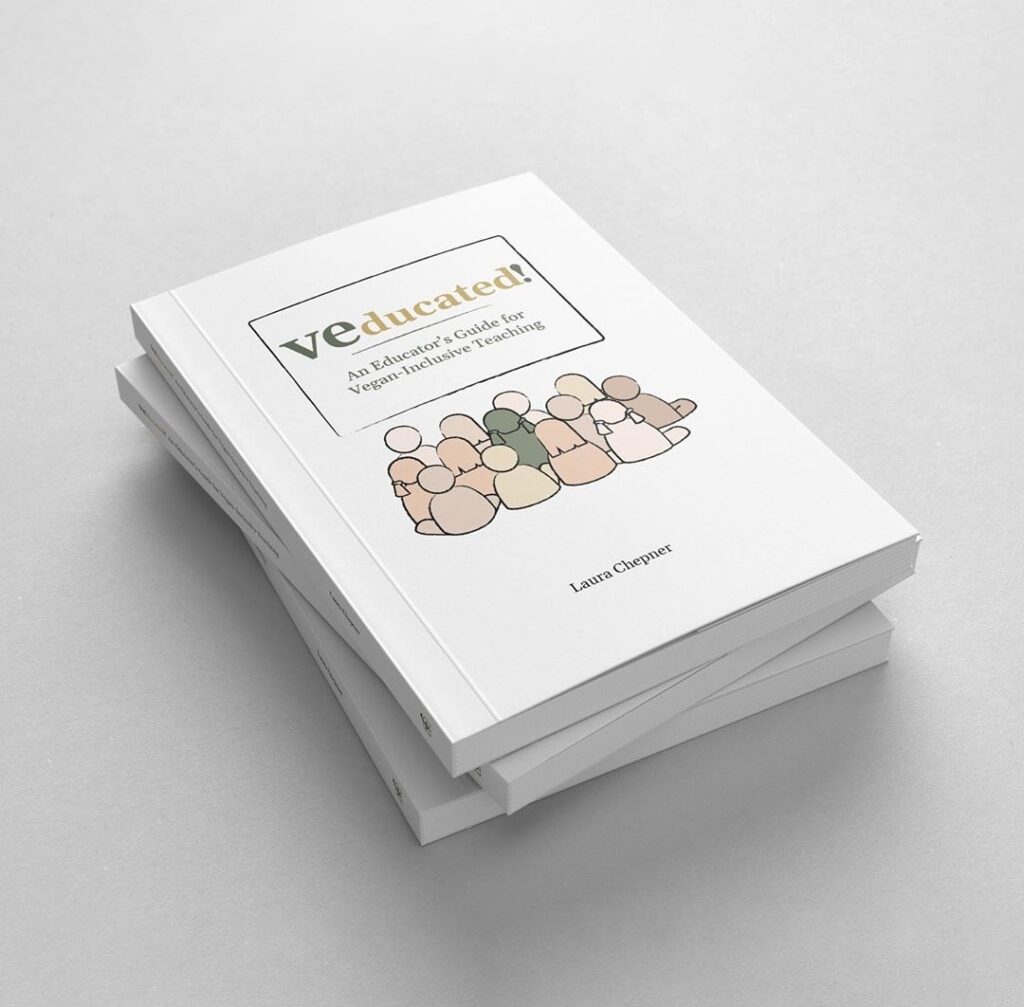 “I hope that many parents around the world can use my guidebook as a starting point for open conversations with their schools. It feels like a legacy project and it was definitely a proud moment, handing a copy of my guidebook to my daughter’s teachers.”

Apart from her guidebook, everything else that Chepner offers through Veducation Consultation is free. It is clear to see that this inspiring mother is driven by authenticity and a genuine desire to bring about positive change, especially in the school system.

“I do what I do out of passion and the more mainstream organisations see of ‘us’, the more likely our services are going to be hired,” she tells me. “It is fantastic that organisations are able to improve and grow with our help and it is also wonderful for vegan employees and vegan parents to know that there will always be someone, somewhere who can help them fight their battles.”

“If a parent has an issue with their child’s school, they can contact me via my email or through one of my social media platforms. I will then contact the school on the parent’s behalf,” Chepner says.

“Know your power and keep requesting vegan options in every setting and in every instance. I’m here to support you in any which way that I can. We are all in this together.”

To support Chepner and her work, follow Veducation Consultation on social media and let others know about her services and guidebook.

What does Brexit mean for veganism?