Indian Institute of Technology Delhi researchers have created a liquid vegan egg for India. We tested it with multiple recipes in our review.

PlantMade, an Indian startup incubated by Four Pursuits Ventures, has introduced ‘Veg Bhurji’ (vegetarian scrambled eggs). The vegan liquid egg brand aims to deliver the same taste as a conventional egg, providing ‘quality vegetarian protein’ without any cholesterol and one-fifth the fat. Currently taking orders for a few parts of Delhi NCR, it is developing the product for its pan-Indian launch in a few months by taking consumer reviews. It looks forward to developing mock meats too.

This liquid egg is made of mung beans and chickpeas along with plant-based stabilisers and flavourings, and has a shelf life of 13 days. Compared to a traditional egg, PlantMade contains a relatively lower protein quantity, but fat levels have been significantly cut. Prakarshi Pulkit, chief of innovations at PlantMade, tells me since there is space for enhancing the product, its nutritional values are subject to revision.

The demand for the plant-based market has been increasing in the Asia Pacific region. The Indian market for plant-based eggs is estimated to grow with a double-digit CAGR by 2029. India captures 10% of the Asia-Pacific plant protein market as per a 2018 report, and its market was estimated at $374.1 million.

What does it look like and how do you cook it?

The ‘liquid egg’ resembles a runny off-white batter that might separate when stored under or over 0°C to 5°C. While a quick shake can fix that, I recommend storing it in your fridge and moving it to your freezer 15 minutes before using. This thickens the mixture, making it easier to handle. The bottle recommends using the product for scrambled eggs, toast, fried rice and wraps. So that’s what I did. Here are my experiments from the kitchen.

(All recipes used here were non-vegan to provide an objective comparison in flavour, texture and cooking time.) 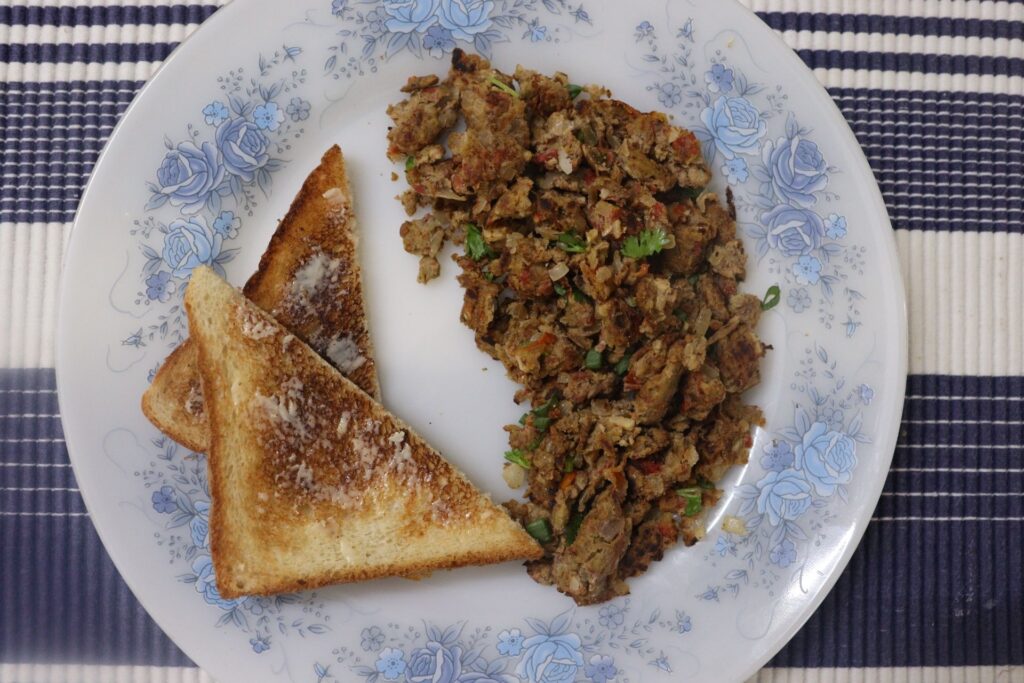 Since the bottle says ‘Veg Bhurji’, it was only fair to cook the PlantMade eggs first. A bhurji calls for eggs to be cooked with onions, tomatoes and coriander, and scrambled until absolutely dry.

The liquid egg takes thrice the amount of cooking time than a normal egg. When they cook slightly, they resemble runny and clumpy plaster and smell like lentils. After seven minutes, the colour starts to yellow and it looks like an overcooked scramble while still cakey and gritty from the inside. So if you prefer your eggs runny, this may not be for you.

It took me a little over 15 minutes to reach this texture and I was fairly impressed by the eggs in front of me. Upon tasting, they’re soft and salty from the pre-added black salt, but do not come close to the taste of a real egg, primarily because it doesn’t smell like one. 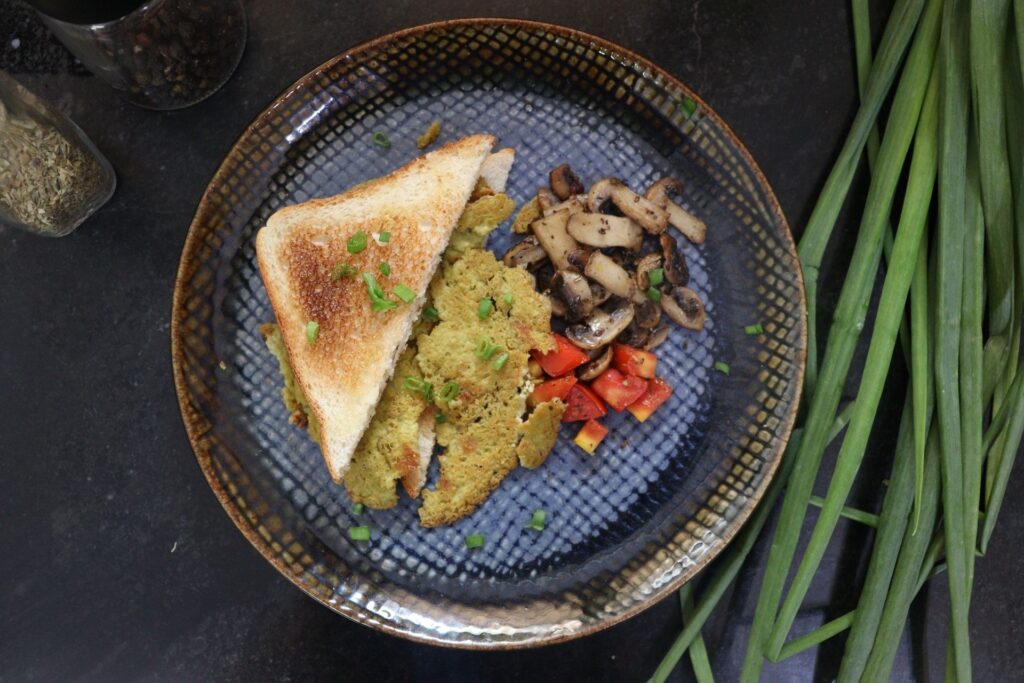 Making an omelette was a completely different ballgame and the toughest of them all — probably why it wasn’t a recommended recipe. After one failed omelette-turned-scrambled-egg attempt, I realised unlike conventional eggs, plant-based eggs have a much higher water content in them. Pulkit tells me, it is thrice as high, meaning your eggs will shrink once the water evaporates.

This time, I poured double the amount of the vegetarian eggs as before into a lightly oiled-pan, over a low flame. As the eggs cook, the water evaporates and the batter splits into flat mounds, since vegan eggs do not have the same emulsifying properties as an actual egg.

This requires a little skill. You need to bring the batter together as it cooks, and flatten it without burning the bottom. When it does cook into something more solid, the omelette is brittle and not easy to flip. I used a plate, but ended up breaking my omelette.

For such a glorious picture, the texture only slightly resembled a real egg. The hold and flavour, however, did not. If anything, it looked like a brittle cheela. Nonetheless, I enjoyed a hearty breakfast. 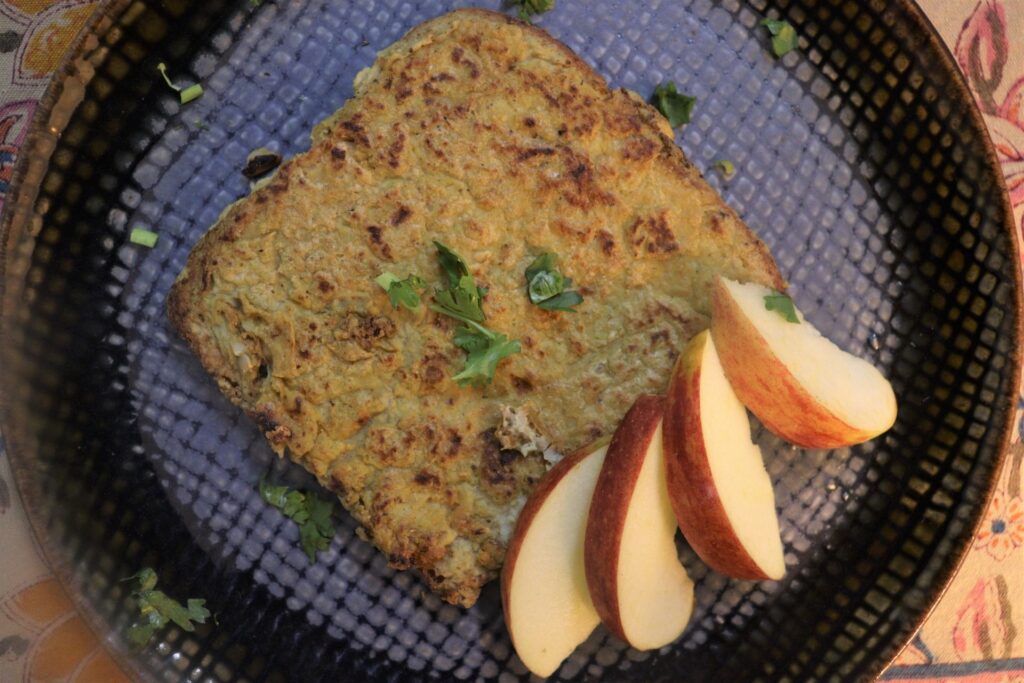 Since the bottle does recommend egg toasts, I gave it a go. Unlike an omelette, I was sure this would hold because of the bread. I left the bottle in the freezer for 20 minutes to thicken the consistency. Seasoned only with pepper and salt, it surprisingly cooked faster than the scramble or omelette and looked and tasted a lot like the real deal.

Can it be used as an egg substitute?

When not being consumed alone, eggs act as binding or leavening agents that provide moisture or air to your dish. Looking for vegan substitutes for eggs becomes difficult, but is not impossible and a plant-based egg, which vouches to taste the same, might seem like the perfect substitute. Pulkit tells me that PlantMade’s vegetarian egg might not be a perfect substitute in every recipe right now, but works marvellously in dishes that simply use eggs for moisture and light binding. 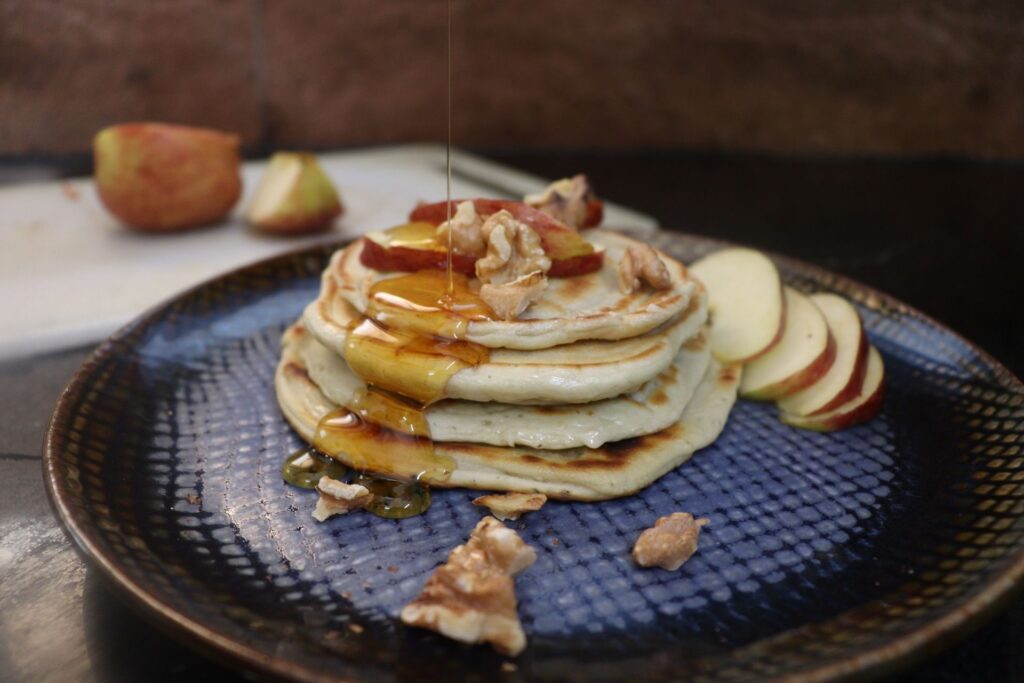 Eaten as breakfast or dessert, every other cuisine has a pancake of its own. And so it was quintessential to include a pancake trial. I went with the classic flour, milk, eggs, sugar, butter recipe, since I already experimented with a cheela. And this was by far the most fun to cook and eat.

I like my pancakes soft and fluffy, not crepe-thin or thick like a cake. That’s a texture I’ve found difficult to achieve without eggs. PlantMade’s liquid egg gives you the perfect batter consistency for incredibly moist and soft pancakes. Despite the presence of black salt, the umami flavour isn’t very strong and gets masked by the milk and sugar. So, if you are not looking for egginess in your pancakes, this might be the most suitable substitute. 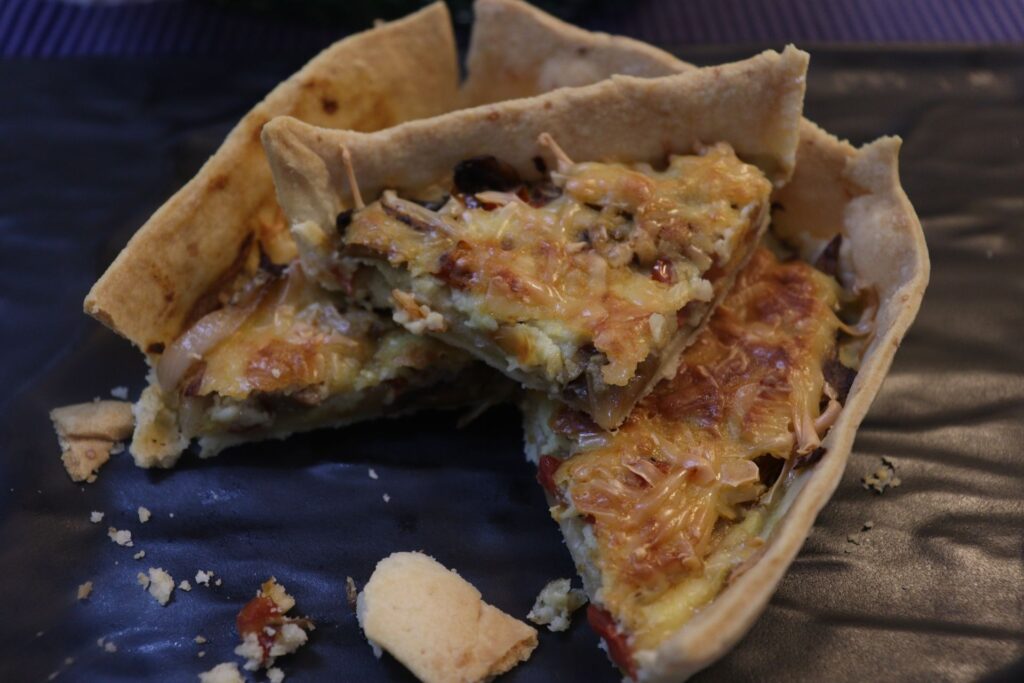 This was the recipe I was most sceptical of. To give a little background, I’ve never been a fan of quiche. The idea of eating an ‘egg pie’ always put me off, so I experimented with everything — from béchamel sauce to a milk and paneer mixture, to find a feasible binding agent for my quiches.

I was excited to bake a quiche using a vegan egg, but after having learnt that it doesn’t emulsify like an egg, has a very long cooking time and has a water-like consistency when mixed with milk, I had my reservations. I used the smallest bowl to bake, fearing a disaster, but to my surprise, it cooked within the same time as a regular quiche and gave the exact same texture.

The consistency of the pour seeped into every corner, and after cooking, it bound together all the filling, fulfilling its purpose. The crust crisps like an egg and on taking a bite, you’re overwhelmed with a creamy base with an almost eggy flavour. It keeps the inside moist and flavourful and strangely, doesn’t make for a soggy bottom. 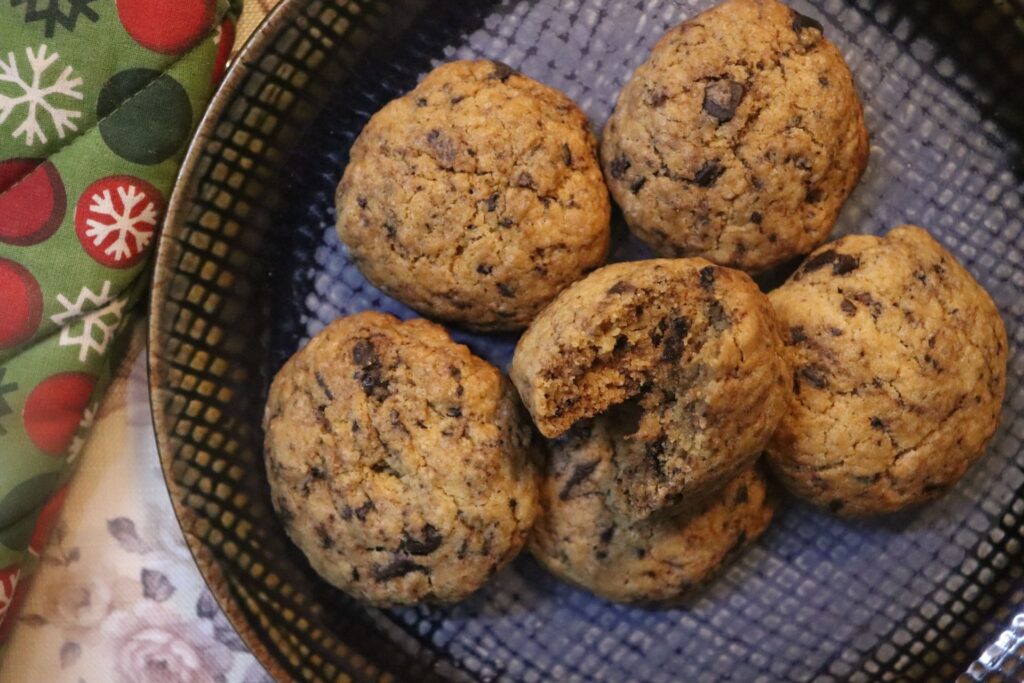 To end a mad experimental day, I decided to bake classic chocolate chip cookies. It was a standard recipe with just a little extra baking powder, since liquid eggs do not provide conventional egg-like leavening.

These PlantMade eggs may not be a complete egg substitute for baking but provide the right amount of moisture and softness. For cakes and brownies, liquid eggs with ground flaxseed and water paste works as a perfect substitute.

The role of eggs in cookies is to hold the batter together and avoid cracks and dryness. Butter and sugar give the crunch, but without an egg, they tend to harden easily. These cookies were crunchy on the outside and cakey on the inside. They broke easily and were soft even after a day of storage, thus mimicking an egg’s properties.

The PlantMade vegan eggs are priced at ₹350 (£3.69) for a 450ml bottle, which is the equivalent of about 10 eggs. However, since they shrink, 60ml of the liquid mixture would mimic a regular 45ml egg, yielding seven to eight 8 eggs per bottle.

While the pricing is on the higher end and the vegan eggs in itself aren’t an exact egg replica, they closely resemble the texture and properties of an egg. They work incredibly well when paired with other ingredients, and I’d buy it again for some mean pancakes and quiches.