Piers Morgan might have spent the last few years of his career vilifying the vegan lifestyle, but what if it’s all just a cry for some plant-based attention?

Poor Piers Morgan. You can’t deny that he has a talent for getting under people’s skins, but when it comes to his relentless pursuit of vegans, let’s stop and take a breath. Instead of being reactive, aggressive and emotional — his wheelhouse of standard responses — let’s embrace him with understanding and patience. He is clearly having some sort of existential crisis and we need to be gentle with him.

The fragility that Morgan displays on an almost daily basis is troubling. If he were female, we would all be taking to our social media accounts, pleading for everyone to “be kind”, so why do we call for his head on a spike instead? Why are threats of force-feeding him Greggs sausage rolls more commonplace than compassion? Frankly, because he has created a persona for himself that is so unlikeable that it’s hard to break through, but he is a man in need of support and what if he is reaching out to vegans and we just can’t see it?

Don’t believe it’s possible? Just as the Scarlet Pimpernel hid his true identity by pretending to be an aristocratic fop, Morgan is the ultimate double agent, masquerading as a vegan hater. Just look at all the ways he has helped our cause.

What fresh hell is this? Utterly ridiculous. (Pic via @charliecondou )

When he posted “What fresh hell is this?”, with a snap of the soon-to-be open alt-butcher shop on October 27, we saw through the bluster straight away. He was offering up free publicity from his sizable platform.

Rudy’s might have significant investment behind it, but you can’t buy marketing gold like this, which is why Morgan stepped up, like the secret vegan sugar daddy he is. In turn, the community thanked him by ensuring a total sell-out on the first day of Rudy’s being open. 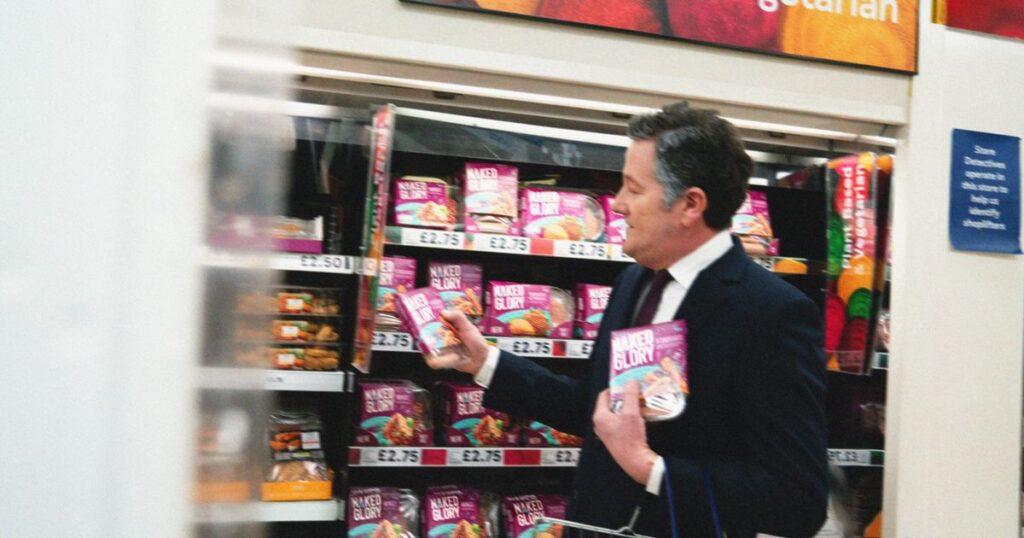 Fame always bites back, so when a picture of Piers Morgan, apparently grabbing some vegan goodies in a supermarket, was shared online, he became the unwitting face of Veganuary 2020.

It wasn’t a real picture, but it would still take some serious work to shirk off the assumption that maybe he wasn’t so sour on vegans after all. Maybe, just maybe, he was being combative for another reason. If only we could figure out what it is. *cough* ratings/staying relevant *cough*.

Greggs might not be a fully vegan company but it is a favourite of the grab-and-go vegan community that loves a bit of flaky pastry. When the vegan sausage roll was launched, suddenly, we no longer had to suffer the ignominy of crumbly pastry where buttery flakes should have been and just in case anyone missed the announcement, Morgan flew the flag in January 2019.

It was a bold move, using your morning TV program to advertise a vegan product, but we salute you sir. Sure, you wouldn’t agree to a blind taste test, but we get it — you couldn’t risk a misstep that would burst the bubble of your vegan-hating persona. If everybody cottoned on, they might think you are simply doing advertorials. What if you actually liked it?

Needless to say, after he publicly decried Greggs’ abomination, it became harder to find one than pasta during the first UK lockdown. You old trendsetter, Piers.

As vegans, we seek to minimise the unnecessary suffering of any and all animals, particularly those without a voice, but that doesn’t mean we get to attack those that shout the loudest. Ethics are not a sliding scale, which is why I feel so bad for Morgan.

This is a man faced with his own impending irrelevance. He knows he has a shelf-life shorter than cheap chuck steak, which is why his tactics for staying in the public eye are getting increasingly desperate and performative. He doesn’t hate vegans any more than I hate all omnivores (I don’t, my best friend is one). Moreover, once he isn’t on TV anymore and his agent stops returning his calls, he’ll need a supportive bosom to cling to and something tells me that it might be our collective one.

At some point, his cholesterol is going to be a concern and he’ll no doubt be told to overhaul his diet, as so many men in their fifties are, which is when he’ll need us to welcome him into the fold.

Come, enjoy our alt-meats, safe in the knowledge they won’t contribute to your clogged arteries. Enjoy our artisan vegan cheeses while being smug that you didn’t support an archaic and cruel industry. Most of all, enjoy your own ability to admit that for all your huffing and puffing, you’ve been impressed by the way we’ve dealt with you, because we never stooped to your level and will still welcome you with open arms into our community. Why? Because we love you too Piers, you old smoothie you.

Amy Buxton
Amy is a committed ethical vegan, raising a next generation compassionate human with her husband and beloved dog, Boo. A freelance writer with a background in PR, she decided to use the COVID lockdown period to refocus her client base and has come to The Vegan Review as a senior writer and editor. "What we should be doing is working at the job of life itself" is Amy's mantra, courtesy of Tom from The Good Life.
Previous articleHumane Society activist on the animal cruelty of the Iditarod sled dog race
Next articleUK retail pledges target of net-zero carbon emissions by 2040