A large number of global companies are facing difficult questions surrounding the forced labour of Uyghur Muslims in supply chains.

At the autonomous region of Xinjian Uyghur in northwest China, hundreds of detention camps are set up where Uyghur Muslims and other ethnic groups are imprisoned. Basic human rights are stripped away where forced labour and other atrocities take place. And companies such as Kraft Heinz and Coca Cola, among many others on the long list, are facing scrutiny over supply chains that run through the Xinjian region.

The Uyghur Muslims are a Turkic ethnic group originating from central and east Asia. They are recognised as native to Xinjiang Uyghur. More than a million Muslims since 2017 have been imprisoned in the Xinjian region under intense surveillance, no religious freedom and forced sterilisation. The authorities have prevented journalists and foreign investigators from examining the situation.

It is restricting their freedom to travel, emigrate, attend school, and other human rights like speech and to practice the Muslim religion. It’s also forcing ethnic Muslims to eat pork, which is against the religion, and undertake forced sterilisations and abortions on the Uyghur women. The Uyghur Muslims are also forced to marry non-Uyghurs and separated them from their children and families.

The Australian Strategic Policy Institute released its latest report, titled Uyghurs For Sale, where it revealed that “27 factories in nine Chinese provinces are using Uyghur labour transferred from Xinjiang since 2017. Those factories claim to be part of the supply chain of 83 well-known global brands.”

Some of the brands listed in the report being connected to those factories are Adidas, Abercrombie & Fitch, Acer, BMW, Calvin Klein, Cisco, General Motors, Lacoste, H&M, Zara and Uniqlo, to name a few. Apple lobbyists are opposing a bill that was passed in September 2020 called The Uyghur Forced Labor Prevention Act. It requires US companies to guarantee they do not use workers from the Xinjiang region. 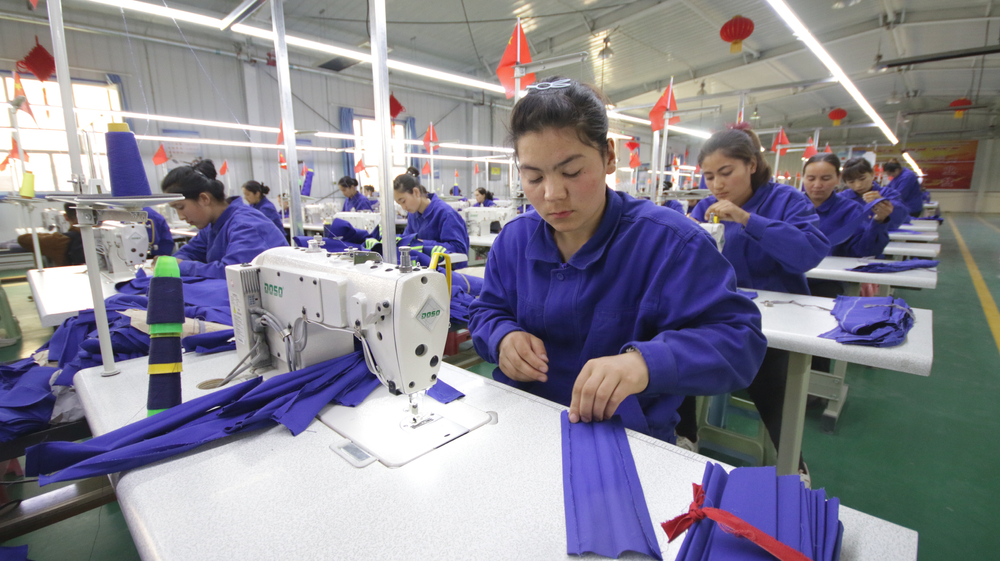 Apple is heavily dependent on Chinese manufacturing and human rights reports have identified forced Uyghur labour being used in Apple’s supply chain. Apple spokesperson Josh Rosenstock said the company “is dedicated to ensuring that everyone in our supply chain is treated with dignity and respect. We abhor forced labour and support the goals of the Uyghur Forced Labor Prevention Act. We share the committee’s goal of eradicating forced labour and strengthening US law, and we will continue working with them to achieve that.”

Even Disney’s live-action remake of Mulan faced criticism for being partly filmed in Xinjiang, which viewers boycotted when the filmed premiered in September.

On Wednesday, the Trump administration announced an import ban of cotton and tomatoes as well as all other products made with those materials. China’s overall output of tomatoes is at a $10 million industry. Cotton is Xinjiang’s largest export; exports from China are a $9 billion industry. Evidence from Chinese government documents shows that hundreds of thousands of Uyghurs in Xinjiang are forced to pick cotton by hand. After the US banned the import of cotton and tomato products from Xinjian, China’s foreign ministry spokesperson, Zhao Lijian, called reports of forced labour “the biggest lie of the century.”

The Xinjiang region is a major source of polysilicon, an essential raw material used in manufacturing most solar panels. Major solar companies such as GCL-Poly, East Hope Group, Daqo New Energy and Jinko Solar bear signs of using forced labour, according to Horizon Advisory. The Chinese government strongly denies all claims of forced labour in Xinjiang.

Since April 2017, such ethnic groups have been detained, most people not even being charged with crimes, instead having their religion used against them. Using satellite imagery, journalists found that 39 camps almost tripled in size from April 2017 to August 2018. China says the detention camps are being used as vocational training centres.

39 countries have publicly recognised the human rights violations in Xinjiang and called upon all countries to respect the principle of non-refoulement. While we continue to fight against the horrific acts of cruelty against animals in China, we must also now fight against the modern-day genocide against Uyghurs and other minorities.

Tijen Najarian
Tijen holds a certification in Vegan Nutrition, and Chinese Medicine from the University of Hong Kong. When Tijen was diagnosed with Crohn’s Disease at age 23, she set out on a path that would dramatically change the course of her life. After years of pain, struggles with the effects of medication, and countless differing opinions from Western doctors, Tijen put her trust in a holistic practitioner and began educating herself on natural medicine and healing remedies. Upon learning that certain foods are inflammatory to the gut microbiome, she chose to cut all animal-based foods from her diet. Based in New York City, she has been in remission for five years and has been blogging her health journey and struggles inspiring many to go vegan themselves, a decision that would ultimately lead to her brand Tijen the Vegan.
Previous articleThe father-daughter duo behind the creativity of the’artyvegan
Next article‘Putting water on fire’: how Hanna Sillitoe healed her skin through plants